Hello everyone! I must confess, I promised an article about my local sewage pond in my last post, but I've been too lazy to actually get around to writing one. However, today's birding, I think, warrants a post. In light of the recent Australian Shelduck sighting at Miranda, me and a few birdnerd friends decided to have a go at 'twitching' this rarity. So to avoid wasting half a day, I got up insanely early (7:30am, because it is a weekend after all) and walked up the road for a bit of a quick bird. I saw almost nothing, as winter has driven the kingfishers and rosellas to warmer places (where I want to be!) and there was no sign of the Sulphur-crested cockatoos. Regardless, it was a nice walk and I still racked up 20 species in 20 minutes, a count not to be sniffed at. Unless, like me, you had a cold, yet another joy of birding in autumn. I left Glen Massey on 23, thanks to a few other birds hanging around the garden, and moved on to the Ngaruawahia Wastewater Treatment Plant (Told you it would get a mention!). I climbed over the gate scouted out the area and saw another few good birds, including lots of black swans, shoveler, Grey Teal and Pied Stilt (New birds for the location). It was still chilly, and by the time I got back in the car I could no longer feel my toes. Oh well. I met up with my friends in Gordonton, and we drove to Kaiaua, briefly stopping at Mangatawhiri to look for Galah (no luck). On to Kaiaua quarry lakes, where we picked up some waterfowl and we had some good *ahem* cormorants by the lake. Along the terribly named "Seabird coast" (It was actually famous for shorebirds) I got my first lifer of the day, Fluttering Shearwater. Laugh all you like, but this 'bogey bird' had been haunting me for months. Everyone seemed to see them in their thousands but me.

Once that loose end had been tied up, we headed down the coast to Ray's rest, where we saw spoonbills, all three gull species, oystercatchers and Banded Dotterels and ate some delicious chips. 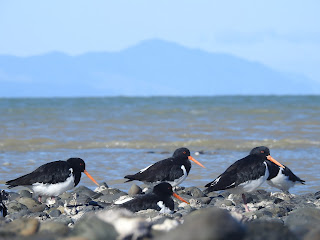 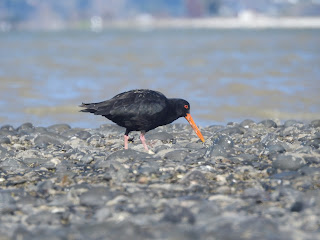 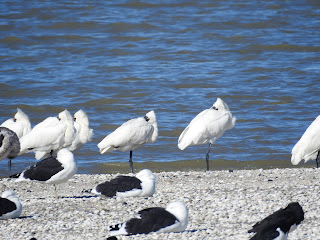 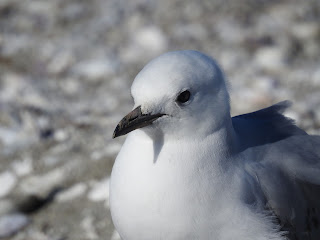 Because none of the dotterels were thoughtful enough to turn into Lesser Sand-plovers, we headed further along the coast, to Miranda itself. It was just coming up to high tide, so the birds were pushed up near the hide. About 150 Bar-Tailed Godwits remained on the shellbanks and mudflats, as well as 4 Red Knot, about a thousand Wrybill, one or two NZ Dotterel and a few Banded Dotterel, about 40 Royal Spoonbills. Constant Harriers flying over ensured the birds kept taking to the air, making it hard to count, although I managed a few nice photos of them in flight. Our first spot was the Stilt pools, where a single White Heron (Great Egret for you foreigners :) ) preened itself. Lots of Paradise Shelducks, Black Swans and of course, Pied Stilts. As well as all the usuals we had EIGHT BLACK-TAILED GODWITS! This is a huge number, and they were a lifer for me so I was very pleased. After searching for the Aussie Shelduck with no luck, we moved back to the hide, where we saw one Whimbrel hanging behind the godwits. Tick. A solitary Pacific Golden-Plover brought the count up again, then our time was up and we headed home. 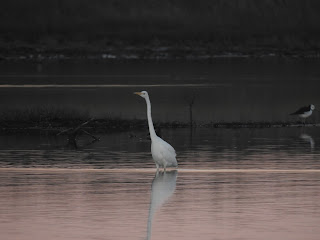 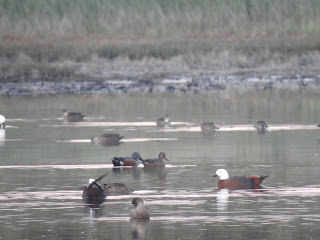 Did we see the Aussie Shelduck? Of course not.

Hello everyone,
I've just realised my Blogger app failed to post my last thing, which is my excuse for the delay. Not only that, but school has been in full swing and I have had very little time to actually go anywhere interesting. After an almost fruitless holiday yielding one lifer (Helmeted Guineafowl at Taitua Arboretum), I had given up hope on birding over this break. Thankfully, on Monday the 1st of April, Mum was kind enough to take me and my (non-birder) brother to Maungatautari on our teacher only day. So for most of the morning we were walking around in restored native bush inside a predator-proof fence. Despite the relatively late start of 9:30am, the bird life was still pretty good, with tomtits and robins abundant, plenty of stitchbirds that refused to be seen, and a few kaka. My highlights were about 5 saddlebacks in the canopy, which was a new bird for the year, and a falcon duelling with a flock of introduced magpies over the forest. This visit brings my Maunga life list to 27.

Also, expect a post on the Ngaruawahia Oxidation Ponds, which was the one which failed to send.
Happy birding!
Posted by Liam B at 12:22 pm No comments: