My interest piqued by reports of kaka in the Hakarimata Ranges, I decided to have a bit of a look for myself. Well, a lot of a look. I got dropped off at 8am at the Rail Trail, in Ngaruawahia, and headed up into the bush with my binoculars and my new/old camera that I picked up off TradeMe for a steal. I followed the track and ascended 80 metres to the ridge trail, where two New Zealand Pigeons (Kereru) swooped majestically above my head, while Shining Cuckoos filled the air with their sweeping whistles. No kaka though.


I continued along the track for about 2 hours, my pack getting heavier on my aching shoulders. Eventually, I arrived at the Summit Lookout, where I got some stellar views but no birds save one or two Grey Warblers in the canopy. After a break, and some beef crackers and about half a litre of water, I started on the second leg of my journey. Almost immediately I heard the cheerful ti-oly-oly-oly of a male Tomtit, a new bird for my Ngaruawahia list! As I continued along the rutted path I kept hearing these birds, and I ended up with a total of at least 11 distinct individuals. Considering there is very little pest control here I was pretty pleased with that! While in a lot of the country these small robins are common, I had been on a lot of bushwalks and hadn't heard these before. Sadly I didn't manage to see one, but it is good to know that they are there. New Zealand Fantails continued to make their presence known as they followed me, searching for any insects I might have disturbed, while Silvereyes zipped through the undergrowth and male Chaffinches made their pink-pink-pink-chewy-chu calls. Yellowhammers laughed at me as I counted Black Swans floating on the distant oxidation ponds, making an unlikely addition to the trip list.

At about 2 I arrived at the southern lookout, finished off the lunch and the last of my water, and prayed that I wouldn't have to walk much further. A pair of Tui screamed past, chased by... an Australian Magpie - no Falcons ☹. And, no kaka. 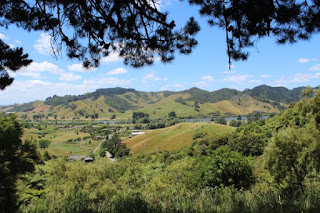 Sadly there was nothing out of the ordinary for the rest of the walk, and the most exciting thing that happened to me was some trouble with the eBird app... I finished up around 2:30, almost too exhausted to make Goldfinches the last bird on my list, bringing my total to 25 species.
Posted by Liam B at 2:57 pm