Technically, I was studying on Wednesday morning. Indeed, I ticked many of the boxes. I was up early, ate a decent breakfast, picked up a book.... and jumped into the car.... (If you are reading this, Mr Thomson, sorry)

7:30 and I arrived Lake Rotokauri Reserve, spotting scope over my shoulder and binoculars around my neck. The sun crept into the flawless azure sky, and the common passerine birds were in full swing. Before I even got out of the car I heard Silver-eyes, Greenfinches, and Song Thrushes, along with other abundant suburban birds. For a solid 5 minutes I just stood there, picking out the individual songs and honing my ear-birding skills (who knows, I might go blind one day!). As I ambled along the track I fantasised about flushing a Japanese Snipe from the nearby raupō, or watching a Little Egret fly overhead (Yes, birders have boring fantasies). I was brutally dragged back to the real world by the booming of a male Australasian Bittern! I say booming, but these birds sound exactly like someone blowing air over the top of a glass bottle very loudly. Totally unmistakeable! I couldn't believe it at first - these birds were a 'year lister' for me and I was only a few minutes from Hamilton city centre! I thought that this bird must have been a fluke, but almost immediately after the first another bird answered from the other side of the lake! 2 bitterns in 20 minutes! Hoping I would see one, I edged my way around the track to the lake itself, where I deployed my scope and went into full nerd mode, ticking the Black Swans and Canada Geese dotted around the lake along with the trio of Pied, Little Pied and Black Shags. I also scanned the lake edges for dabchick, but no luck. Mallards were of course present, however no Grey Ducks. I played a Spotless Crake call and soon heard the prrrrrrrr of a nearby bird answering. Another wetland bird! 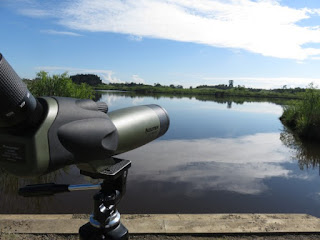 Then, another bittern began booming to my left, and I balanced precariously on the very top of the bench trying to see it. No luck, but every time I stepped down from the bench, ready to give up, it began again. After a good 20 minutes of yo-yo-ing I ignored the bittern and began to walk around the lake. Much to my disappointment I couldn't walk all the way around the lake, so I backtracked and went the other way, the bittern taunting me all the way. In the satellite ponds around the main lake I saw White-faced Herons, and Spotted Doves around the houses and gardens, reminding me just how urban this area is. Siamang Gibbons from the nearby Hamilton Zoo briefly caught me off guard, hooting and howling, before I realised what they were. As the day warmed up, Skylarks began their almost endless summer song, while a Shining Cuckoo whistled from a huge oak tree. It was around 10am now, and I headed back, on my way to the lakeside bench. On my way I heard 4 distinct bittern calls from very different points around the lake, bringing my bittern count up to at least 4. And then, as I snuck along the boardwalk, I startled a bittern sitting on the path! It took off frantically, crashing into the nearby rushes, while my heartbeat slowed to sensible levels. Naturally I was ecstatic, as I hadn't seen a bittern in over a year, and certainly didn't expect to see one. Only a few minutes later, another bittern took off from the boardwalk, this one much bigger and greyer. This was crazy!


Nothing amazing after that excitement, and I still didn't get a photo of a bittern, but nothing could get me down after the awesome privilege of two bitterns in a few minutes...
Posted by Liam B at 11:27 am